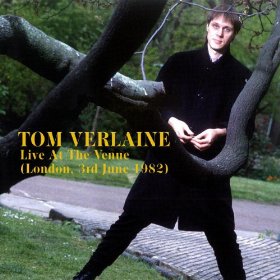 Songs On Tom Verlaine Live At The Venue

Inevitably, my first beef is that I want more. It’s only 72 minutes long and in particular, I want more from Marquee Moon, something from Adventure and more from the second Tom Verlaine album called Dreamtime.

It’s a really good performance with good sound except for an irritating buzzing noise on one of the songs. Verlaine is in good voice, the band supports him well and the performance doesn’t feel forced in any way.

This is my preferred choice from the live albums by Television and Tom Verlaine but I see it as supplemental to the studio album Marquee Moon which I have loved for nearly 40 years.

I’ve brought in reviews for The Miller’s Tale from Amazon.com. That’s because this live 1982 recording was the exciting part of the release for TV fans.

Do you think it’s the best by Tom Verlaine with or without Television.

It might surprise you but I class Tom Verlaine and Television as a mixture between punk/new wave and art rock. The music never really fitted into the punk scene even though it came out of the CBGBs club that also gave us The Ramones. It seems to me that Verlaine deconstructed music and created a different and (virtually) unique pattern.