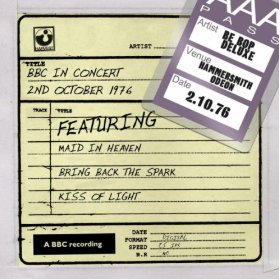 Set List On The BBC In Concert 2nd October 1976

Because I think Sunburst Finish and Modern Music are the best studio albums by Be Bop Deluxe, I believe this has a better balanced set list Live In The Air Age although it’s sad to see Sister Seagull missing.

I couldn’t resist buying it when I saw Bring Back The Spark and a version of Blazing Apostle that’s nearly twice as long as the one on Live In The Air Age.

It’s a dynamic performance. Bill Nelson is in fine voice and his guitar blazes with the best of them.

There’s a roughness to these In Concert recordings that I like because they haven’t been edited and fixed up in the studio. It’s a live album that sounds like because it crackles with energy.

In Blazing Apostles in particular, Bill Nelson proves that he’s the guitar hero that you think he is as there’s an extended solo. You expect this in Adventures In A Yorkshire Landscape but that’s gentle and atmospheric. Blazing Apostles rocks.

I’m biased because I think Be Bop Deluxe should have been a huge success. This was also the tour that I saw Be Bop Deluxe… in Hanley, Stoke On Trent I think or it may have been Wolverhampton.

What Is The Best Live Album by Be Bop Deluxe?