You Can’t Do That On Stage Anymore Vol 2: The Helsinki Concert is a live album by Frank Zappa.

Although the title suggests that this was one individual performance, it was actually compiled from the concerts at two concerts at Kulttuuritalo in Helsinki, Finland on September 22 and 23, 1974.

This makes it very different from other albums in the You Can’t Do That On Stage Anymore which are compilations from many different concert recordings.

That indicates that Frank Zappa was very impressed with these Helsinki gigs and this album needs to be considered carefully by anyone who wants some live Zappa in their lives. 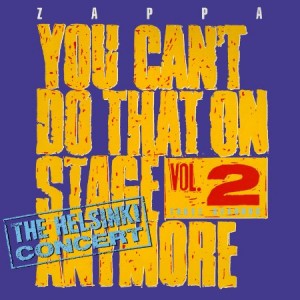 Although the famous Roxy & Elsewhere album was recorded the year before, the band of musicians playing with Frank Zappa has shrunk considerably. That said, this is considered to be one of the best bands by Zappa aficionados.

This is another of the live albums by Zappa that I’m classifying as art rock because of the complexity and variety of music.