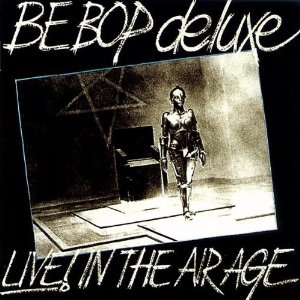 Be Bop Deluxe Live In The Air Age Set List

The set is dominated by the Sunburst Finish album (that’s the one with the nude girl on the cover) with the compulsory classic from the earlier albums – Adventures in a Yorkshire Landscape, Sister Seagull and Maid in Heaven – and a couple of unreleased songs.

My earliest investment with Be Bop Deluxe was the Hot Valves EP – Maid In Heaven, Bring Back the Spark, Blazing Apostles, Jet Silver and the Dolls of Venus – which I played over and over again. These are in my favourite top 10 songs by the group and it’s a shame that two of them are missing.

What Others Say About Live In the Air Age

Be Bop Deluxe aren’t fashionable and I haven’t seen their albums on the best live albums lists.

Buying Live In The Air Age by Be Bop Deluxe

You can buy the album or hear samples of the songs from Amazon.com – Amazon.co.uk – iTunes. It is also available from eBay.

Do you think Live In the Air Age is a great souvenir of what Be Bop Deluxe were like live or do you wish there was an album with a more extensive set list?