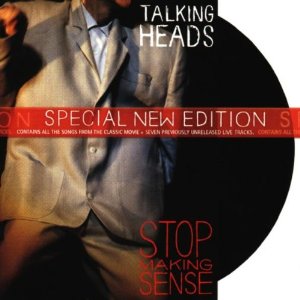 This album has five songs from the latest Talking Heads album, Speaking In Tongues together with their four “big hits” – Psycho Killer, Life During Wartime, Once in a Lifetime and Take Me to the River.

It also includes a couple of non Talking Head songs, David Byrne’s What a Day That Was and Genius of Love by Tom Tom Club.

Personally I’d prefer a set list more focused on their earlier songs so I give the set list 7/10.

Talking Heads have put together a tight, funky performance that makes this album very addictive.

Here are some videos of Talking Heads performing live in concert in 1983.

If you’ve seen the film (or even attended the concerts back in 1983), you will listen to the album and remember the visuals on stage. This is one of those rare cases where I prefer the DVD to the CD.

I don’t play it anything like as often as The Name Of the Band Is Talking Heads.

My rating system has put together a total of 26 and I’m surprised.

I also own the Stop Making Sense DVD and my problem is that I keep struggling with the set list. It doesn’t have enough Talking Heads songs that I want to keep hearing from their early days and it also excludes songs I like from the later Little Creatures studio album.

What Others Say About Stop Making Sense

Talking Heads were a big favourite of the critics for their first four albums – 77, More Songs About Buildings And Food, Fear Of Music and Remain In Light.

Stop Making Sense appeared after those halo days but it is regularly nominated on the best live album lists.

As you can see, plenty of people rave about this live album. Others prefer The Name Of This Band Is Talking Heads as I do.

Just about every best live album list has one Talking Heads live album on it.

Amazon reviewers love it too.

It’s nominated in my poll to discover the greatest punk and new wave live albums ever, just click on the link to vote and see the results so far.

What Do You Thinking Of Stop Making Sense By Talking Heads?

Who do you think is right, the critics or me? Is this the best live album by Talking Heads?

If you love this album, I’d like to know what makes it so special so please leave me a comment below.

And the Best art rock albums