BBC In Concert Hammersmith Odeon 17th December 1981 is an early concert recording of Duran Duran made and broadcast by the BBC in the UK.

It was recorded at the Hammersmith Odeon in London..

At this stage they’d only released one studio album, the self-titled Duran Duran and they were a leading band in the New Romantics movement in new wave. Girls On Film had been a top 5 single in the UK whilst Planet Earth and My Own Way made the top 20.

Of course, they’d go on to become a huge teeny-bopper band but, at this stage, they sound very fresh. 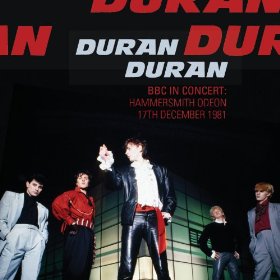 Try not to let their later pretty boys image put you off, the group had plenty of talent and play a commercial style of new wave dance rock.

The New Romantics may have had a funny dress sense but they knew good tunes when they heard them and bands like early Duran Duran and Ultravox needed to be rediscovered.

I prefer guitars to synthesisers but there’s a place for live recordings like this.

Is it the best live album by Duran Duran?

It seems funny to think of Duran Duran as a new wave band as a reaction to and development from punk rock but it’s what they were at this stage in their careers as well as pioneering synth-pop.