Roxy & Elsewhere is a live album by Frank Zappa & The Mothers. 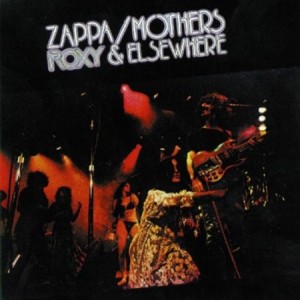 Zappa normally worked with a large band of expert musicians who were able to meet the demand of this complex music.

There are also backing singers on Cheepnis.

If you recognise Chester Thompson’s name, he is the drummer who went to work with Genesis when Phil Collins became the lead singer. He’s played on many of their live albums including Seconds Out and Three Sides Live.

This is the first Frank Zappa album that I ever bought but it hasn’t been the last. I have to admit that my first impressions weren’t positive.

It came across as odd rather than good. That’s because it’s unlike any other “rock and pop” music happening in the late 1960s and early 1970s.

I’ve discovered that Zappa is an “in the mood” artist that insists that I pay attention. This is not background music but the main event.

If you’ve got the time, then it’s fascinating. Both funny and superb musically as it crosses many different styles. Zappa is recognised as a great guitarist and this has some terrific guitar solos.

Frank Zappa has released a very large collection of studio and live albums and I’m still very much of a novice following other people’s recommendations of where to concentrate my attention. With hindsight, I may have been better to start with We’re The Best Band That You’ve Never Heard because the covers help to make that more accessible and help you to get Zappa.

Is it one of the best live albums by Frank Zappa? Which do you recommend?

It’s tough to categorise Zappa but I’m treating this as art rock because of the complexity and range of music covered combined with the humour. It’s certainly very different from normal classic rock.