Delaney And Bonnie On Tour With Eric Clapton is a live album by delaney and Bonney.

It was recorded at the Fairfield Halls in Croydon, England on 7 December 1969 while Eric Clapton was with them.

There is also a much extended box set with: 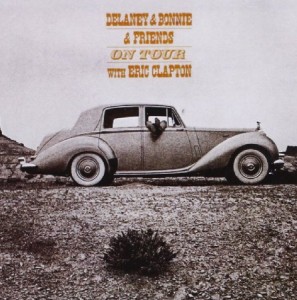 Songs On Delaney And Bonnie On Tour With Eric Clapton

1. Things Get Better
2. Por Elijah-Tribute To Johnson Medley: Poor Elijah/Tribute
3. Only You Know And I Know
4. I Don’t Want To Discuss It
5. That’s What My Man Is For
6. Where There’s A Will, There’s A Way
7. Coming Home
8. Little Richard Medley:Tutti-Frutti/The Girl Can’t Help It/Long Tall Sall/Jenny Jenny

While Eric Clapton gets the attention, this was a remarkable touring band:

I haven’t heard this for some time as I gave away my copy to a charity shop. I was hugely disappointed when I got it because there’s very little flashy guitar and it didn’t sound how I expected.

Buying Delaney And Bonnie On Tour With Eric Clapton

Is it the best live album by Eric Clapton? Which do you recommend?