Live from Madison Square Garden is a live album and DVD by Eric Clapton & Steve Winwood. The two stars were members of the supergroup Blind Faith back in 1969. 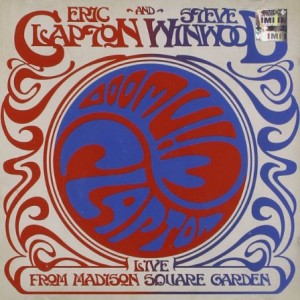 I suspect the audience wanted to hear plenty of Blind Faith, some Cream, Derek and the Dominos and Traffic songs plus some from their solo careers.

What they got were the first four songs from the only Blind Faith album – Had To Cry Today, Presence Of The Lord, Well All Right and Can’t Find My Way Home plus a song that has been added to the deluxe version, Sleeping In The Ground.

Two songs from Layla and Other Assorted Love Songs – Tell The Truth and their cover of the Jimi Hendrix song Litte Wing. We also have Voodoo Chile because Steve Winwood played on Electric Ladyland. The Traffic songs – Glad, Pearly Queen and Dear Mr. Fantasy. Three JJ Cale songs – Low Down, After Midnight and Cocaine and various old blues standards.

Helping Clapton and Winwood were:

I think this album promised much but when I’ve listened to it, I’ve been disappointed. I expected a stronger set list and a more exciting performance. I’ve satisfied my curiosity and I’m left wishing that there was a recording of Blind Faith performing live in 1969. In my mind, this is a hybrid album that is struggling to find a mental slot.

It doesn’t help that I’m more of a fan of Clapton than Winwood and when I listen to the Traffic live albums, I’m focusing more of Dave Mason and/or Chris White.

Plenty of fans disagree with me and love it.

Is this a great live album? Is it the best live album by Eric Clapton or Steve Winwood?