One More Car, One More Rider is a live album by Eric Clapton.

At the time, it was thought that this would be the last time Clapton would tour the world. We now know those comments weren’t true as there have been more tours and more live albums. 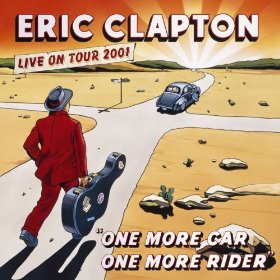 We have a set that includes plenty of Clapton classics including quite a rare version of Layla together with tracks from the more recent albums, Reptile and Pilgrim.

That’s a great band of professional players and they give Clapton a very solid base. The album has a lovely relaxed feel to it without any sloppiness.

On its own, I think this album sounds very good but few of us, even me with my love of live albums, wants every Eric Clapton live album.On the quiet and gradually over the years, I’ve collected quite a few but there aren’t many I listen to regularly.

Instead I think most of us want to be selective and find the best, most interesting and most historic of his live recordings.

The problem is that he’s had such a long career, first as the fiery blues guitar player for Cream and Derek & the Dominos, then as the classic rock star in the mid to late 1970s. Since then he’s been both recycling and trying to reinvent himself.

It’s still worth checking around on the websites to make sure that there isn’t a more up-to-date or less expensive option. There is also the option of a DVD.

Do you think that this album is the best Eric Clapton live album?