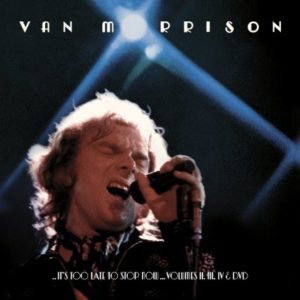 No content is duplicated from the original version but volumes 2, 3 and 4 includes a mixture of alternative versions and new songs.

I’ve marked the songs that appear for the first time so that, if you have the original and you want to download the new tracks, it’s easy for you to identify.

Brown Eyed Girl was not included in the original version of It’s Too Late To Stop Now but has been added as a bonus to the 2008 version of the CD. As it wasn’t on my copy, I’m treating it as new.

Disc 1 – Live at the Troubadour

I gave the original album a rating of 28 out of 30. This deserves at least the same and might get 29 which will equal the highest I’ve given to any album.

I’m surprised that the excellent Saint Dominic’s Preview isn’t repeated from the original album and there are a stack of songs from Morrison’s studio albums up to 1973 that’s I’d love to hear played live by him in his prime.

Even after another three CDs worth of excellence, I’m still hungry for much more live Van Morrison.

Personally I think both 1973 sets plus Astral Weeks and San Francisco are essential and you can get these albums from Amazon.com – Amazon.co.uk.

The album is featured in two of my genre polls as it’s a combination of blues rock and R&B.