Superstar 1960s rock group Cream reformed briefly in 2005. Royal Albert Hall London May 2-3-5-6 2005 is a live album with the pick of the songs from these four concerts.

In October 2005 Cream went on to play three concerts at the Madison Square Garden in New York.

Jack Bruce, their bassist and singer died yesterday, 25 October 2014 and I realised that, whilst I’d featured their earlier live albums, Live Cream, Live Cream vol 2 and Wheels Of Fire, the reunion concerts weren’t on here. 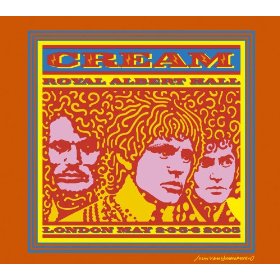 I’m missing some Cream classics from this recording. I’m not sure what they had against Disraeli Gears because Strange Brew, Tales of Brave Ulysses (played in New York) and SWLABR make the best of compilations. Sitting On Top of the World was played in America. (Setlist.fim contradicts itself on whether it was played in London). The Fresh Cream album is particularly well represented.

Amazon give the impression that Badge is missing from the mp3 version. That doesn’t make sense and I thought it was probably a mis-typing but it’s not listed on the iTunes download either.

While I admire the fitness of Ginger Baker to do it as a pensioner, I could have done without a long drum solo on Toad.

There is also a concert DVD which does include Sitting On Top Of The World.

This is a very different Cream from the one that thrilled audiences nearly 40 years earlier. The songs are still expanded with solos but they are more refined, less explosive than in the 1960s and they are shorter too.

Eric Clapton admits that this isn’t an attempt to recreate what was happening when the band were first together.

Some people will appreciate it, others will miss the 1968 innovative version of Cream.

I think we also need to allow for the fact that the reformed group only did these four gigs that were recorded. While they will have practised extensively, I don’t think anything will match the pressure and excitement of playing in front of an audience to get a band into the groove.

What we are left with is a very competent, professional performance. I liked a snippet from an anonymous review on Amazon.

That sums it up very nicely.

I need to listen to it a few more times before I give it a formal rating but I expect to be around the 24 mark – recommended but not essential as far as I’m concerned.

It’s missing some important tracks that would suggest a compilation album was better for casual fans but I felt that Cream were always a bit stilted in the studio and the live album format suited them better.

At the time of writing, this album is beating the other Cream live albums in my readers poll to find the best blues rock live album.

Is this Eric Clapton at his best?

I have a best Eric Clapton live album poll that includes the Cream albums.

Cream are one of the original blues rock groups so their albums feature in the poll to discover the best blues rock live albums.