Nine Tonight is the second live album by Bob Seger and the Silver Bullet Band. It was recorded in 1980 in Detroit when Seger had become an international superstar.

Before his first live album, Live Bullet, Bob Seger was a hard working rock’n’roll singer who had gained a great reputation in his home territory of Detroit, Michigan but he wasn’t well known or very popular elsewhere in the USA or internationally.

Live Bullet is a fiery, energetic set which demanded attention and Seger had the nous to capitalise on it with his following commercial studio albums, Night Moves and Stranger In Town.

Releasing Nine Tonight was an obvious move to give the fans a chance to hear the new Seger show with the hits.

This album was remastered in 2011 and an extra song – Brave Strangers – has been added. 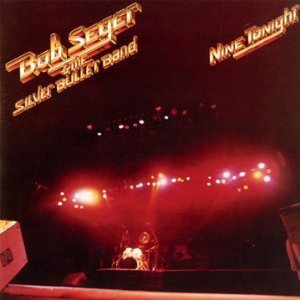 Five songs from Against The Wind, five from Stranger In Town and four from Night Moves mean this album is heavily biased to Seger’s most recent albums.

I will be writing a full review.

It’s been playing in my car and I’ve found it extremely difficult to take out because it sounds sooo good. It’s much smoother than Live Bullet so it’s more for classic rock fans than people who like their music hard and heavy.

And Against The Wind

What Other People Say About Nine Tonight

Nine Tonight is overlooked by the best live album ever lists with the focus on Live Bullet but this has the big hits.

Reviews at Amazon are very positive with only a few people who have been disappointed.

Is this the best live album by Bob Seger?

The polls that are most relevant to fans of Bob Seger and Nine Tonight are:

You may also be interested in these other polls, depending on your musical tastes – best hard rock live albums and best singer songwriter live albums