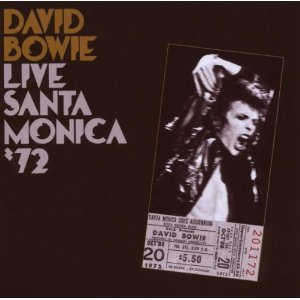 This is a very good set list from the early David Bowie albums although I’d have liked him to play even more from the The Rise and Fall of Ziggy Stardust and the Spiders from Mars album.

The band on this tour was:

Here is a version of the Ziggy Stardust song performed live in 1973 to give you an insight into what it was like to see David Bowie live in what many would say was his best time.

This is the section where I think about how well this Santa Monica live album summarises David Bowie for people who only want one or two of his albums in their collection.

David Bowie is well served for compilation albums and the compliers have done a good job. The Platinum Collection is very comprehensive. The three CDs can also be bought separately as The Best of David Bowie 1968 – 74, 74 – 79 and 1980 – 87.

These work well if you just want the hits in a form that you hear on the radio.

If you’re prepared to stretch the number of David Bowie albums you buy, I’d say that you could consider the studio albums.

Santa Monica catches David Bowie in his glam rock stage with plenty of tracks from his two most critically acclaimed albums, Hunky Dory and Ziggy Stardust.

If this is your favourite period, then it is a good companion to the studio albums. Alternatively if you already have those two studio albums, you may want to experience a different period of Bowie and David Live and Nassau Coliseum are compelling alternatives.

What Other People Say About The Santa Monica Live Album

I haven’t seen it on any of the best live album lists but it was released many years after the event.

Comments at Amazon are very positive.

What Do You Think About David Bowie and Santa Monica?