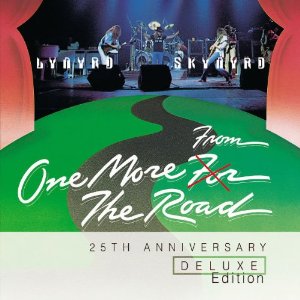 I’ve got the 25th anniversary version of this album and it’s a little confusing with alternative takes stuck on the end. My advice is to put the first 16 songs on your iPod as one album and the remainder on another. Otherwise you finish with a disc with two Freebirds and two Sweet Home Alabama’s.

If you like your rock Southern style and with plenty of guitars, then One More From The Road will challenge the Allman Brothers Live At Fillmore East.

I will be writing a full review for this album.

Here are some videos of the original Lynyrd Skynyrd performing live in concert.

What Others Say About One More From The Road

This is very popular on the greatest live albums ever lists and is particularly recommended by:

It is also very highly rated at Amazon.

Buying One More From The Road By Lynyrd Skynyrd

What Do You Think About One More From The Road?

Do you agree that this is a great live album or is it overrated? Is this the best Lynyrd Skynyrd live album?

Please help me find the best live albums by voting in the readers polls. I’ve entered it in both the Best Southern rock live albums and the best blues rock albums

If you like the guitar based Southern rock boogie of One More From The Road, you should hear…