American Cutie is a live album by Little Feat on their tour to promote their third studio album, Dixie Chicken.

This is a single disc version of Late Night Truck Stop released in 2001. This is a radio broadcast recording that I think squeezes through the copyright laws. 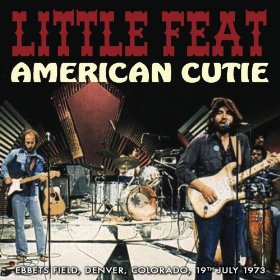 Six songs from Sailin’ Shoes and four from Dixie Chicken mean that this is a very strong set list. On BestEverAlbums.com, the first three studio albums are ranked 2nd, £rd and 4th behind the live album Waiting For Columbus.

On Your Way Down is on Late Night Truck Stop and Got No Shadow is split into two parts. These may have been joined together on American Cutie or the second part is missing. The order of the songs has also changed.

The sound quality has been criticised in the reviews at Amazon. I’ll accept that it isn’t polished but I think it sounds very acceptable and it certainly puts over the excitement of a Little Feat concert in 1973.

I think that an early 1970s recording makes a nice contrast with the much more famous Waiting For Columbus.

Do you think that this album is the best Little Feat live album?

This album is included in the best Southern rock live albums poll.