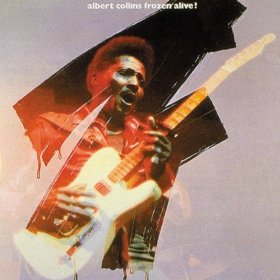 I’m not an Albert Collins expert. Someone recommended his blues playing records to me and I thought that I’d start with his highly regarded live album.

I’m not a guitar expert but I understand that Albert Collins has a great sound from his Telecaster.

It certainly sounds good to me.

Collins is a very fluent player and there’s much more guitar on this album than the live blues classic Live At The Regal from BB King.

The vocals are strong and the rest of the band provide excellent support.

I don’t know much about the background to this album but it sounds like Albert Collins was a natural live. I say was because he died in 1993.

The crowd are enjoying it – no surprise there – but he doesn’t have the rapport with the crowd that BB King has in Live At The Regal.

If you like your blues live, then I highly recommend this album. It’s not as slick as some but it plays very well.

My rating feels a little stingy but I haven’t rated enough blues albums to get a feel between the brilliant, the very good and the good.

What Others Say About Frozen Alive

This was #16 on the DigitalDreamDoor list of best blues live albums and the highest rated Albert Collins album.

Amazon has some good reviews:

What Do You Think About This Albert Collins Live Album?

If you’ve heard Frozen Alive, I’d like to know what you think so please leave a comment.

Is this the best Albert Collins live recording?