Jazz Blues Fusion is a live album by John Mayall.

After the success of The Turning Point when Mayall turned his back on traditional electric blues and worked with an acoustic band without a drummer, he continued to innovate.

The electric guitar is back as he worked on the connecting areas of blues and jazz. 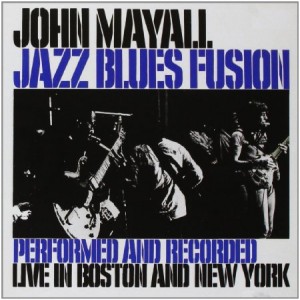 Songs 1 to 4 (the original side 1) come from Boston and the remainder from New York.

This is an excellent album which remains rooted in the blues rather than any kind of jazz rock fusion.

While Freddy Robinson isn’t the best known of John Mayall’s lead guitarists, he had already worked with Howlin’ Wolf and Ray Charles. He converted to Islam in 1975 and changed his name to Abu Talib.

These videos feature the music from the album rather than a live to film performance.

Is this a great live album? Is it the best live album by John Mayall?