Live At The Cafe Au Go-Go (And Soledad Prison) is a live compilation album by John Lee Hooker.

The first eight songs are recorded at the Cafe Au Go-Go in Greenwich Village, New York in 1966. The last five songs are from a concert at Soledad Prison in California in 1972.

With some effort you can buy these two recordings separately and you’ll get two extra songs from the Soledad concert with John Lee Hooker Jr. singing. 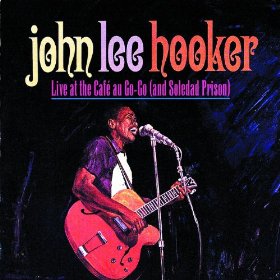 At The Cafe Au Go-Go

I’m Bad Like Jesse James
She’s Long, She’s Tall (She Weeps Like A Willow Tree)
When My First Wife Left Me
Heartaches And Misery
One Bourbon, One Scotch And One Beer
I Don’t Want No Trouble
I’ll Never Get Out Of These Blues Alive
Seven Days

At the Cafe Au Go-Go he is backed by Muddy Waters and his band – pianist Otis Spann, guitarists Sammy Lawhorn and Luther Johnson, George Smith on harmonica player and Francis Clay on drums.

Buying Live At The Cafe Au Go-Go (And Soledad Prison)

Do you think that this album is the best John Lee Hooker live album?

This album is included in the poll to find the best live blues album.

What Else What Happening This Year?