Thursday Night in San Francisco is a live album by Albert King. These are the leftover tracks from the concerts that first produce Live Wire / Blues Power.

There is also Wednesday Night In San Francisco which also comes from the same concerts. 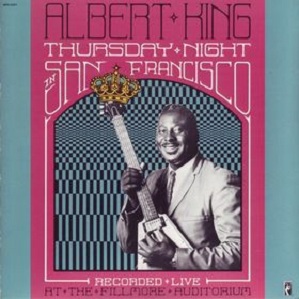 Feedback from Amazon is very positive.

What are the best live albums by Albert King?

What Are The Best Live Blues Albums?

With two concerts by Albert King providing three live albums, there is a difficult decision about which to buy.

All three are included in my readers poll to find the best live blues albums.

Other Useful Webpages About Thursday Night In San Francisco