The Turning Point is a live album by John Mayall.

What would you do if you nurtured the superb guitar talents of Eric Clapton, Peter Green and Mick Taylor and they left you for Cream, Fleetwood Mac and The Rolling Stones?

Well John Mayall broke up the Bluesbreakers and, instead of a dominant electric guitar based sound with drums, he turned to acoustic guitars, flutes and saxophones. He started on a journey towards jazz/blues fusion and created an extraordinary live album. 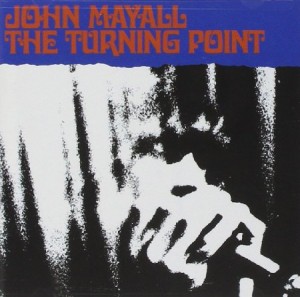 The original 1969 release had the first seven songs and the other three were added as bonuses when the CD was reissued in 2001. These came from the same concert.

Performing on the album are:

This delicate sound is very different from the normal Bluesbreakers sound and it is often beautiful.

The one problem I have with it is that it puts too much focus on Mayall’s voice. He’s an OK singer but I think it’s the biggest weakness on the album.

Here is a live video of three of the same people performing California in 1970. Steve Thompson had been replaced by Alex Dmochowski.

The Law Must Change filmed for television in 1969

Is this a great live album? Is it the best live album by John Mayall?