Wheels of Fire is a double album by Cream with one LP recorded in the studio and the other capturing the live Cream experience in March 1968 in California.

Cream were a very different band live compared to the studio as it gave the great instrumentalists – Eric Clapton, Jack Bruce and Ginger Baker – a chance to stretch out and show off their talents. 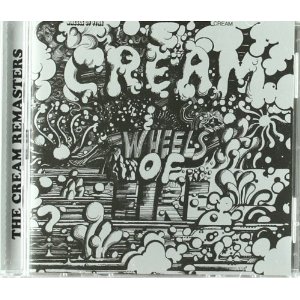 Disc one: In the Studio

Disc two: Live at the Fillmore West (it’s since been discovered that the first three songs were actually recorded at the Winterland, also in San Francisco.

As this blog is about live albums and recordings let’s start by focusing on them.

Crossroads is a cover of the Robert Johnson song Cross Road Blues and it is an absolute classic Eric Clapton showing exactly why he has such a great reputation as a guitar player.  The song ranks as #10 on Guitar World’s 100 Greatest Guitar Solos. See what you think.

Spoonful is a much slower blues and gives each member a chance to shine. Traintime has Jack Bruce showing off his endurance on harmonica.

I have a problem with Toad. Have you read that I hate long drum solos elsewhere on this blog (e.g. on How The West Was Won or Made In Japan). It’s all Ginger Baker’s fault as this 16 minute instrumental includes 13 minutes of drum solo. Baker is magnificent but it goes on far, far, far too long.

The studio disc would have made a good album on its own but it was the live recordings that make Wheels Of Fire special to Cream fans.

These studio tracks would feature on later Cream live albums as follows:

This album –  Sitting on Top of the World – 4:58
On Royal Albert Hall 2005 (Amazon and Wikipedia report this is on the CD version but it isn’t in the mp3 versions to download)

Crossroads, Spoonful and Toad that are played live on Wheels Of Fire also appear on the Royal Albert Hall 2005 Cream reunion album

What Others Say About Wheels Of Fire

There are plenty of five star reviews at Amazon which also show how highly rated this album is.

What Do You Think About The Live Tracks On This Album?

You’re very welcome to comment on the studio tracks but I’m particularly interested to know what you think about the live songs.

Does the guitar solo on Crossroads live up to its reputation? What do you think about long drum solos?

Is it one of the best Eric Clapton live albums?