Made In Japan is one of the best and most famous hard rock live albums that captured mark 2 Deep Purple at their peak, promoting the outstanding Machine Head album.

Purple have gone on to release plenty of live albums, some that date before this 1972 concert and some after but this is the one to hear first.

Just the look of the cover makes me quiver with excitement. I loved this as a teenager and have continued to love it for over thirty years. 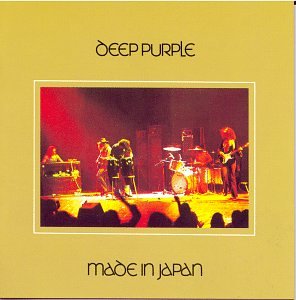 If you love classic rock from the 1970s with extended solos, you need to hear Made In Japan.

After In Rock, Fireball and Machine Head, Deep Purple had the opportunity to put together a tremendous set list.

They didn’t quite do it although what we have is still excellent. The original double live album version of Made In Japan had the first seven tracks and the three encores were added when it moved to CD.

There’s also a 40th anniversary edition which adds two more versions of Black Night and an extra version of Speed King. They are unnecessary as far as I’m concerned.

Why have I deducted a mark from the set list rating?

Well I’d have been thrilled to hear the other songs from Machine Head – Maybe I’m A Leo, Pictures Of Home and Never Before but even more I’d have loved live versions of Demon’s Eye and Fireball and more songs from In Rock.

I’m not a fan of extended drum solos so The Mule could have been shortened and while I like hearing groups do covers on live albums, I’d give up Lucille for another Deep Purple classic.

I’d also have liked to hear this version of the group play the slow, bluesy When A Blind Man Cries, the B-side of Never Before, the single off Machine Head and since added to that album. Unfortunately lead guitarist Ritchie Blackmore didn’t like this great song and refused to play it live.

Moody s*d but he sure played a mean guitar!

It starts with a belting, full-throttle version of Highway Star and quickly moves into the definitive version of Child In Time, my all-time favourite Deep Purple song. If you think the In Rock version is good, you need to hear it live in 1972.

The studio album versions of the songs are used as the base for each song but they move into extended instrumental jams where Purple show other groups how to put together a live performance.

Hard, fast and heavy but always coming back to the tune like great jazz players.

Smoke On The Water starts with the famous riff and, just as you’d expect live, it’s awesome. Even better is Strange Kind Of Woman that takes on a life of its own as Blackmore and Gillan trade “licks” – who’d have thought a vocalist could imitate a guitar so well?

Here is Strange Kind Of Woman for you to enjoy.

Personally I think Space Truckin’ goes on too long and a 2 minute drum solo is just about my limit. Shortening these would have created the time to fix my minor moans about the set list.

Legend has it that this album hasn’t been touched up which shows just how great Deep Purple were on stage. The quality is awesome.

It’s also the best Deep Purple captured at their very best time after one of the legendary hard rock studio albums.

I’ve read criticism that the encores disk doesn’t match the main performance in sound quality. I don’t know why this should be but I don’t find it a problem although the original LP version is so ingrained that I’m always surprised when the riff from Black Night starts.

Purple played three concerts in Japan and Live In Japan gives you all three versions. Some say that some of the non-selected versions are even better. I don’t know because to me, it’s taking obsession too far. Purists may not like the fact that the songs didn’t all come from the same night.

This is where I consider how suitable Made In Japan is for people who only want one or two Deep Purple albums.

There is quite a good Deep Purple compilation album called 30: the Very Best Of Deep Purple which confusingly comes as either a single or double CD with 18 or 28 tracks. 11 out of 18 tracks from the single CD are from Mark 2 of Deep Purple recorded between 1970 and 1973.

That’s how central this period is to the legacy of Deep Purple and it’s a period that Made In Japan sets the standard. When I was 15 or 16 I bought their first compilation called 24 Carat Purple. Of the eight tracks, four of them were recorded live in Japan and now appear on Made In Japan – Smoke On The Water, Child In Time, Strange Kind Of Woman and Black Night. It also featured the studio version of Speed King.

Made In Japan is the very first place to start your Deep Purple album collection unless you absolutely hate live albums.

After that, go either to:

But start with Made In Japan. Skip The Mule if you hate drum solos. You may agree with me that Space Truckin’ goes on far too long but if you like rock, I’m sure you’re going to love the rest.

Overall Rating For Deep Purple Made In Japan – 28/30

This is one of the finest hard rock live albums ever made by possibly my favourite hard rock band. I’ve always preferred Purple to Led Zeppelin and Black Sabbath.

I can’t imagine being without it in my collection and if I could only own one Deep Purple live album, this would be it.

It was thrilling as a teenager and is still thrilling to my 50+ year old ears.

What Others Say About Deep Purple Made In Japan

In the greatest live album lists, this has been highly acclaimed.

Classic Rock magazine famously forgot Made In Japan from their list of best albums and issued a big apology. From memory, they thought it should have been in the top 3 but it wouldn’t have displaced Live and Dangerous by Thin Lizzy as their #1.

If you love hard rock music, you need this album in your collection.

Buying Deep Purple Made In Japan

If you love rock music, you need this album. To help you to find the album quickly and easily, I’ve given you the following links::

What Do You Think About Deep Purple Made In Japan?

I’d like to know if you think Made In Japan deserves its amazing reputation.

What is the best Deep Purple live album

Please help me find the best live albums by voting in the readers polls:.