Who’s Last is the second live album released by The Who recorded in 1982 when the group was past its best and released in 1984.

Since Live At Leeds was recorded in 1970, this was the first chance to hear tracks from Who’s Next and Quadrophenia live but really, they shouldn’t have bothered.

It was their retirement record, released to mark the end of The Who.

I love The Who but there are much better live albums to choose from than this. 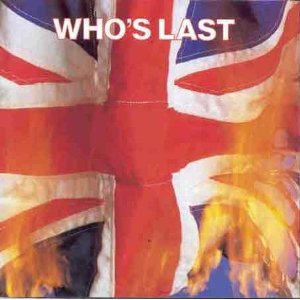 Sure we can all quibble about missing out on personal favourites but as a round-up of the best of The Who from 1965 to 1982, it’s a great collection.

I can understand that some people will be concerned about the cross-over of tracks with Live At Leeds but it’s worth remembering that when this was released, Leeds only had six tracks. Four appear on both My Generation, Magic Bus, Substitute and Summertime Blues but I think you’ll always go back to the Leeds album for the definitive versions.

The Who have never had much variation in their set lists between shows on the same tour and between tours.

This is where the problems start. This is recorded after Keith Moon’s death with Kenney Jones on the drums. I like The Faces but the gap in styles in huge.

It’s got high expectations to live up to.

The Who have always had a reputation as an outstanding live act and the controlled fury of Live At Leeds set the bar very high.

Energy levels vary on this album and in places they sound tired and glad that they are retiring.

Here is The Who performing Twist And Shout from Shea Stadium in 1982.

Another big problem for this album.

First, back in 1982 I still found it difficult to accept The Who without Keith Moon and I never have bought the two studio albums Kenney Jones appears on (Face Dances & It’s Hard).

Second, the sound quality and mix is poor, in particular for the vocals and bass which are two essential elements of The Who’s sound.

It feels flat and leaves me feeling flat while I’m listening to it while Live At Leeds is an exhilarating experience that gives me a surge of energy.

It doesn’t sound as if anybody was interested in this album except as a way to milk the fans who were missing The Who as a live band and wanted a record of live tracks from Who’s Next and Quadrophenia.

I’m very glad the Who did reform because this is a very poor album to bow out on when you realise what a fantastic live band The Who are and how thrilling it is to see them in concert.

I’ve played the album a few times but every time I give it a chance to redeem itself, it disappoints.

It’s not the worst live album in the world… this is still The Who, one of the best rock bands ever with a classic back catalogue.

If I want to hear The Who live, I turn to Live At Leeds, Blues To The Bush and Join Together (although this Who at Las Vegas style takes some getting used to if you love Live At Leeds). The Who have also issued several live compilations but I’ve only bought The Kids Are Alright so far but again that’s preferable to Who’s Last.

I recommend you do the same.

What Do Other People Say About Who’s Last By The Who?

This album hasn’t been nominated in any of the greatest live albums lists that I’ve seen.

Reviews are mixed on Amazon. Some people appreciate having a late period Who live album others condemn it for a terrible mix and sound.

It’s out of print at the moment as a CD and it’s not available as a digital download. You can get second hand copies of the CD but my advice is don’t!

At least that’s valid until they remaster it when the sound may do justice to the excellent set list.

If you really want it because you want all the albums by The Who, try eBay or Amazon.com or Amazon.co.uk

Is this the best live album by The Who?

There are plenty of live albums by The Who even if there is little from their peak period with Keith Moon after 1970.

You may also be interested in best hard rock live albums