Live From Toronto is a live album by The Who from their 1982 tour promoting the It’s Hard studio album.

And yes, it was recorded at Maple Leaf Gardens in Toronto, Canada.

The Who Live From Toronto 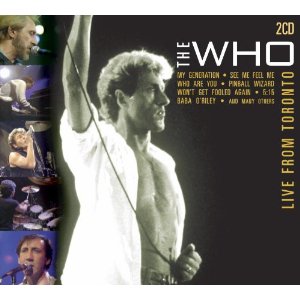 Since The Who didn’t vary their set list much, this is quite an adventurous mixture with songs from It’s Hard and some rarely played oldies like Boris The Spider, Love Ain’t For keeping and Naked Eye.

The original members of The Who – Pete Townshend, Roger Daltry and John Entwistle are joined by Keith Moon replacement drummer Kenney Jones and Tim Gorman plays keyboards. This is a much reduced sound compared to Join Together from 1989.

I haven’t heard this album because it’s not available in the UK except as an import,. I’ve read that the sound is poor.

Here is a video of The Who performing My Generation in Toronto in 1982.

And Love Reign O’er me from the same concert.

And Love Ain’t For Keeping

Buying The Who Live From Toronto

What Do You Think About the Who Live From Toronto?

Do you like this live album and do you think that it’s one of their best?

You may also be interested in the best hard rock albums poll.