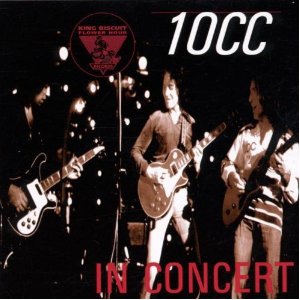 This is a much tougher, harder-edged band than you’d expect from the cultured, quirky pop shown on their singles and first two studio albums.

I think this version of 10cc will be an acquired taste and it’s probably best to start with 10cc and Street Music, get to know the songs and then I think you’ll enjoy the raw live versions much more than you will coming cold to them.

The good news is that you can hear the full concert (but not download it at the moment) from Wolfgang’s Vault.

Here are some videos of the original line up of 10cc performing live in concert.

I’m Not In Love (not on the album) from Knebworth in 1976, their last concert and the first verse is missing.

Rubber Bullets also from Knebworth in 1976

What Other People Say About 10cc In Concert