A Round and a Bout is a live album by British new wave group Squeeze, recorded in January 1990while the group was promoting their album called Frank.

Squeeze came to prominence with the punk/new wave movement in the late seventies and had success with both singles and albums. The band broke up in 1982 but came back together in 1985 but never recovered their prominence.

Squeeze A Round And A Bout 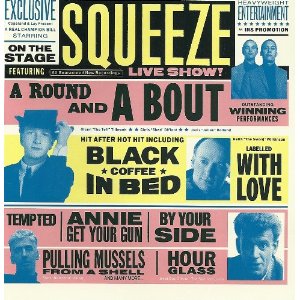 Four songs from the Frank album and two from Babylon and Or will make the set list look unfamiliar to fans who haven’t followed the band since the early eighties.

What Other People Say About This Live Album By Squeeze

It hasn’t appeared on any best live album lists.

Feedback at Amazon is good.

Buying A Round And A Bout By Squeeze

What Do You Think About This Squeeze Live Album?

Do you think it is their best?

Should it be included in any of the best live album polls on this blog?