It was recorded to celebrate the 40th anniversary of the release of the album, Sgt Pepper’s Lonely Hearts Club Band by The Beatles.

Fans of The Beatles may fear this is disrespectful so feel assured that it was engineered by Geoffrey Emerick, the same man who won a Grammy award for engineering the original album.The band were backed by a full orchestra when it was recorded on 12 December 2007.

I’ve always wanted a live album by the late 1960s version of The Beatles but the closest I’ve come to it is when Paul McCartney raid his back catalogue. 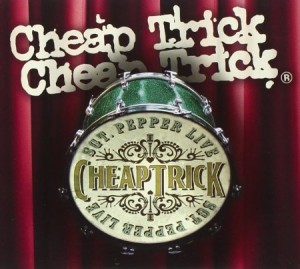 Cheap Trick do an excellent job of recording this legendary, but in my opinion overrated Beatles album. If anything, they stay too close to the album because it comes across as an impression of The Beatles.

I think it would have been great to have been at the concerts but is the live album really necessary when you can play the original? Since they’ve released live versions of Magical Mystery Tour, Daytripper and perhaps others, I wish that they’d gone further and played more, especially more Lennon songs.

Then I could see a reason why the album becomes an essential purchase because it steps away from both the original SPLHCB album and from the McCartney live albums.

At the moment, when I’m in the mood for live Beatles, I head for Tripping The Live Fantastic (Highlights) which is excellent.

Other people can see a reason to get it.

Is it the best live album by Cheap Trick?