Stripped is the album by The Rolling Stones which is their equivalent on an “Unplugged” album which were so popular in the mid 90s.

It was recorded in 1995 and comes from some small gigs and some “live in the studio” recordings.

It sounds very different from the guitar heavy version of The Rolling Stones that blazes away on Get Yer Ya Ya’s Out and Brussels Affair. 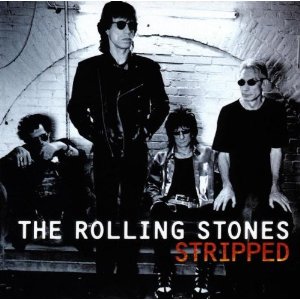 A very good set list from the Mick Taylor days with two songs from each of Let It Bleed, Sticky Fingers and Exile on Main St. The focus is on many of the lesser known songs so there’s no Brown Sugar, Midnight Rambler or Tumbling Dice.

This gives the album a freshness that some of the other live albums don’t have.

This is the first time the Stones have covered a Bob Dylan song and it had to be Like a Rolling Stone.

There have been plenty of Stones live albums but Stripped has a unique sound rather than appearing like an imitation of the glory days in the early 1970s.

It’s not completely acoustic throughout but the emphasis is on an acoustic blues approach.

The Stones sound intrigued and invigorated by the idea of Stripped although it inevitably loses some of the frantic energy you’d associate with the group.

Here are some videos I found on YouTube for stripped to give you a great idea of what it was like to see and hear The Rolling Stones.

I like this record but the very purpose is not to sound so much like The Rolling Stones. Newcomers to the group will get totally the wrong impression and should get Brussels Affair to hear what they sound like on a great night.

I also feel it’s a little bit of a cheat to include songs recorded live in the studio.

Total Rating For Stripped By The Rolling Stones – 24/30

Stripped was a chance for the Stones to reinvent themselves as an acoustic blues band and it works very well.

It wouldn’t be the first Rolling Stones album I’d buy but for fans who have the main studio and live albums, it is a treat.

What Others Say About Stripped

I haven’t seen this featured in any of the best live album lists – people go for the much more traditional sounding Get Yer Ya Ya’s Out.

The reviews at Amazon are very positive and show that this is a very good but not essential live album by The Rolling Stones.

I’d like to know if you agree that this is a very worthy album by the Stones so please leave a comment below.