Real Time is a live album by progressive rock group Van Der Graaf Generator which captures their reunion concert at the Royal Festival Hall in London, England on 6th May 2005.

I think of Van Der Graaf Generator as hard-core progressive rock. If you’re attracted to them by the similarities between Peter Hammill and Peter Gabriel’s voices then you need to be aware that there is none of the Genesis whimsy.

VDGG didn’t play it for laughs and you have to be in the right mood to appreciate the beautiful but depressing music. Then it can be remarkably uplifting. 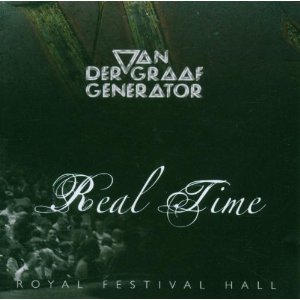 What a great set list of classic Van der Graaf songs. Mind you, I am biased as my favourite VDGG studio album is Godbluff and they’ve even missed off what I think is the best song, Arrow.

Pawn Hearts is said to be their classic album and we’ve got two tracks  – Lemmings and Man Erg but such is their consistent quality, they could have picked virtually anything from their second to fifth albums and it would not have reduced the quality.

Two new songs from the 2005 album Present don’t sound out of place but I’m glad they honoured their glorious past. There’s also Black Room from a Peter Hammill solo album which had originally been written for the album to follow Pawn Hearts… unfortunately they split up for the first time.

Killer and Refugees are the tracks that may be the gentlest introduction to the group as both have a vaguely commercial feel (ok it’s relative – top 20 op music, this is NOT).

The songs don’t deviate much from the studio album versions but they are beautifully played. There’s an exciting tension that makes each song compelling.

While there have been personnel changes over the years, this is the classic line-up that recorded H to He, Who Am The Only One, Pawn Hearts and Godbluff.

My guide to a great live album is to answer the question “Do I wish I’d been there, that night?” Yes I do. Van Der Graaf Generator have returned with all their old magnificence.

Is this the Best live album by Van Der Graaf Generator?

Please vote in my readers polls:

When you vote you can see the results so far.