Live In New York is a live album by prog rock group Nektar.

It was recorded at The Academy Of Music in New York City on September 28th 1974, a few months before the studio album Down To Earth was released.

It comes in three formats: 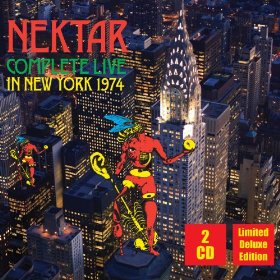 As a purist, I prefer the Complete Live In New York but this is only available at a reasonable price as a digital download. It also has the original concert set list order with Remember the Future given prominence.

The original recordings suffered from poor sound which rather hid the well performed versions of their accessible prog rock. The 2011 remastered version is much better and lets the songs flourish.

As an English band based in Germany, Nektar avoided the hype that pushed other British prog bands to fame and fortune in the early 1970s and they are overlooked by many who would enjoy their performances.