Live At The Capitol Theater, Passiac NJ, September 19th 1978 is a live recording of a Bruce Springsteen and the E Street band.

It’s not an official live album approved by Springsteen but I understand that it’s issued legally from a loophole in the copyright laws that lets live recordings appear after 25 years.

In many way, a live concert from the 1978 Darkness On The Edge Of Town tour is the Holy Grail for Springsteen fans. And where better to record Bruce than New Jersey.

This is a radio broadcast that became one of Springsteen’s most famous bootlegs sold under names like Passiac Nights and Piece De Resistance.

Bruce Springsteen has started to release his archive live recordings including the Agora, Cleveland concert from 1978. These are available on his own website. 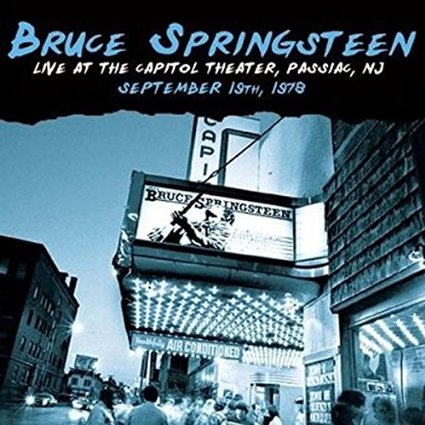 The set list is brilliant. The Darkness album wasn’t very well produced but the songs really come alive here. It’s great to hear Meeting Across The River and She’s The One from the Born To Run album as well as the obvious classics.

Poor Bruce. he plays a very long concert and I’m thinking about moaning that various early songs aren’t included as well but, to hear those, you’ll need the Live In London album.

Personally I’d prefer to drop the radio elements and just stick with the concert.

In the concert itself, the only words I can think of are fantastic, superb, brilliant. I have a couple of the bootlegs of this concert and the band were on fire.

From reading other reviews, the big problem is with the recording which leaves you with a problem. It’s supposed to be remastered but the sound quality is lacklustre.

The entire tour received rave reviews and the Live 1975 – 85 album included recordings from the Roxy in LA. I wish Springsteen would release an authorised version with proper sound quality. (Update – he has now started to do this with the 1978 Cleveland show available.)

I’ve linked to Amazon.co.uk where you can hear the song samples for yourself. You’ll need to decide whether the quality is good enough for you.

You can hear 30 second samples of each of the songs at Amazon.co.uk. I recommend that you do it before buying. When I checked Amazon.com, it wasn’t for sale but that might have changed.

This is a terrific concert as the many bootlegs show but there is a risk to buying this version so you’ll have to be your own judge.