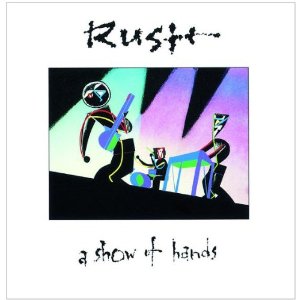 Songs On A Show of Hands

All the songs were recorded on the 1988 tour except for Witch Hunt (Part III Of Fear) which is from 1986.

Buying A Show of Hands

Is this the best live album by Rush?

I have some problems trying to classify the albums produced by Rush. I was clear that the first one, All The World’s A Stage was a mix of prog rock and heavy metal but some of the others have veered away from those two genres towards classic rock.

This album is NOT considered good enough to quality for the poll to find the best classic rock album. Exit Stage Left is included. Do you think I’m wrong?