Led Zeppelin BBC Sessions includes an in concert performance of the band from April 1971 as well as live in the studio recordings and songs from gigs in 1969.

It’s often overlooked as a Led Zeppelin live album with much more attention given to:

The 2012 release of the reunion concert, Celebration Day has also drawn attention away from the BBC Sessions album. After all how many live Led Zeppelin albums do most fans need?

I think that’s a shame.

What we get on this album are: 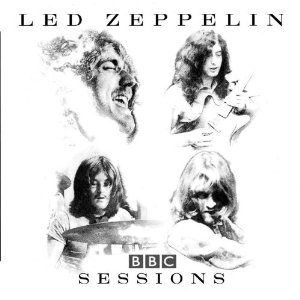 I made a mistake when I loaded this album on to my iPod because discs 1 and 2 should be kept separate rather than combined. I’m going to look at this as two different albums.

Disc 1 gets repetitive – three versions of Communication Breakdown, two versions of You Shook Me and I Can’t Quit You Baby all recorded within a few months of each other in 1969. Yes they are different (for example the second You Shook Me is 5 minutes longer) but it’s too much in one sitting and discourages me from hitting the replay button.

Disc 2 (the 1971 in concert recording) had to be shortened by leaving out Communication Breakdown and What Is and What Should Never Be and had 7 minutes of Whole Lotta Love edited out. What a shame and it costs the album at least one mark in my rating system. This set is history being made because I believe it’s the first time that the Led Zeppelin IV songs were played in public and even before the legendary album was released.

Imagine being amongst the first to hear Stairway To Heaven and Black Dog, my personal favourite Zeppelin song.

This is where this album excels. Zeppelin extended their songs by incorporating blues classics and lengthy instrumental passages but it doesn’t seem as bloated as later live albums. It helps not having The Mule (a long drum solo).

There’s a raw intensity about these songs that you don’t get from the more polished studio versions. This is exactly why I like my music in a live setting.

Yes Dazed & Confused is still massively extended but at least it’s shorter than the versions on The Song Remains The Same and How The West Was Won.

Here are some old videos of Led Zeppelin performing in concert in the early days.

Led Zeppelin in Texas in August 1969

I prefer my live recordings from one concert or one tour. This album mixes concert recordings and live in the studio sessions and collects songs from 1969 and 1971.

If this was released as two separate albums rather than a double CD, I suspect my ratings would be higher for both and certainly the second CD from 1971 is a great example of Zeppelin live.

There’s little going on with the crowd, even when they are there which takes away the live atmosphere although it still leaves the intense sound.

I finished with a total rating of 23/30 which isn’t bad but isn’t great.

I suspect that the second CD would probably score 26/30 on its own and even more if we could get the missing songs.

What I do know is that if I want to hear some live Led Zeppelin, I turn to this album and start with the Immigrant Song in preference to either The Song Remains The Same or How The West Was Won.

It’s a great demonstration of why many people thought Zeppelin were the greatest rock band in the world. For me, they may not have overtaken The Who, The Rolling Stones and Deep Purple but I’ll admit that they were contenders.

My advice is to get this album if you see it at an attractive price. I suspect you’ll be like me and play CD2 far more than CD1.

What Others Say About BBC Sessions

It doesn’t feature in any of the greatest live album ever lists. I think that’s because of the repetition on CD1 and the live in the studio sessions.

People on Amazon love it.

The 1971 live concert captured on this album is my personal favourite live Led Zep recording and, if you haven’t heard it, I think you need to listen to it.

I’d like to know what you think about this album and how you think it compares to How The West Was Won and The Song Remains The Same.

What Is The Best Led Zeppelin Live Album?

There is a readers poll to find the best Led Zeppelin live album.

Live albums by Led Zeppelin have been nominated in the following readers polls. I haven’t included BBC Sessions because of its strange nature but The Song Remains The Same and How The West Was Won are doing well.

Because there are so many excellent hard rock and heavy metal live albums, I have created a second division poll where you may find more of your favourites. Albums can be promoted if they get enough votes.