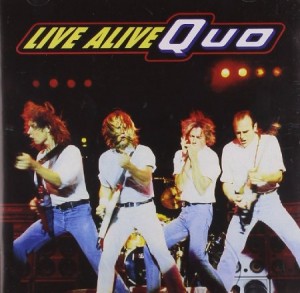 1. Whatever You Want
2. In The Army Now
3. Burning Bridges (On And Off And On Again)
4. Rockin’ All Over The World
5. Roadhouse Blues Medley which includes The Wanderer, Marguerita Time, Living on an Island, Break The Rules, Something ’bout You Baby I Like and The Price of Love
6. Caroline
7. Don’t Drive My Car
8. Hold You Back
9. Little Lady

The medley that starts and finishes with their classic cover of The Doors song “Roadhouse Blues” lasts for over 20 minutes. It was edited down and released as a single to promote the album.

On the one hand I appreciate the bonus songs from London but the live album purist that wants a proper concert recording struggles with the encore Caroline being in the middle rather than the rousing climax at the end.

Is it the best boogie rock live album?