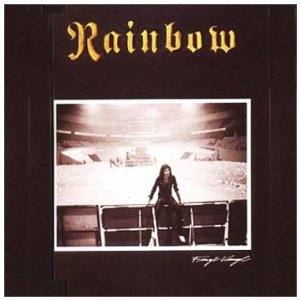 “Who is the singer?” is the critical question to ask for Rainbow. The answer on this album is:

Joe Lynn Turner on most of the tracks but it’s Graham Bonnet on Since You’ve Been Gone and Bad Girl and Ronnie James Dio on Man On The Silver Mountain and Long Live Rock ’n’ Roll.

I’m surprised by the inclusion of Man On The Silver Mountain as that’s on the other Rainbow live albums like On Stage.

My interest in Rainbow fell away when Ronnie James Dio left as I disliked the way Rainbow started to sound like the synthetic rock of Foreigner.

I couldn’t find it on iTunes when I looked.

Do you like Final Vinyl or do you really want a full concert of the Joe Lynn Turner version of Rainbow to be released?

Is this the side of Rainbow that you prefer?

Please help me find the best live albums by voting in the readers polls. I’m classifying this stage of Rainbow’s career as AOR rather than hard rock.