It was recorded between 1969 and 1971 and released in April 1971 and features the classic song Brown Sugar.

It has a notorious album cover featuring the groin of a man and the original vinyl sleeves had a real zip for the fly. The back cover is even more revealing as the denim jeans have come off.

We don’t have a live album from tours promoting Sticky Fingers or the next album, Exile On main Street so the songs haven’t made as many appearances as you might expect on the many live recordings by The Rolling Stones.

This article also needs to be updated for recent releases including the re-releases of the Sticky Fingers studio album with live tracks from 1971. 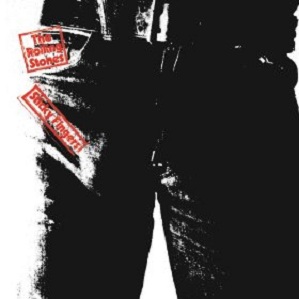 The Songs On Sticky Fingers

We don’t have a live version of this song yet. The song was played live on the Bigger Bang tour in 2006.

One of my favourite Rolling Stones songs with a superb solo by Mick Taylor as the group jams.

In 2004, Rolling Stone magazine listed it at #25 on its list of “The 100 Greatest Guitar Songs of All Time. It’s a shame this wasn’t played live by the Stones while Mick Taylor was a member.

Brown Sugar, Bitch and Dead Flowers appear on the DVD Ladies And Gentlemen: The Rolling Stones which is a film recorded on the 1972 Exile On Main Street tour.

It’s amazing how little the songs from Sticky Fingers have featured in the recordings of the Rolling Stones.

In 2003, Sticky Fingers was listed as #63 on Rolling Stone magazine’s 500 Greatest Albums of All Time so we’re not talking about an album that isn’t recognised as outstanding.

I wonder if the problem is that the songs are too linked to the Mick Taylor period.

I think it’s a shame you can’t create a live version of the album. I expect Let It Bleed and Exile On Main Street to do a bit better when I come to look at those albums.

What Other People Say About Sticky Fingers