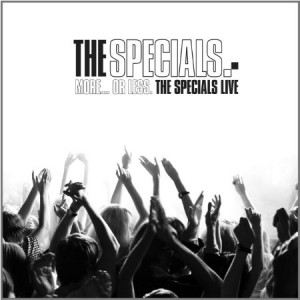 This is a comprehensive list of their songs and packed with their hit singles from 1979 through to 1981.

Members from the 1979 band performing at these concerts:

If you can free your mind of the fact that these are middle aged men (e.g. Terry Hall was 52 years old), then this is a very good performance. An advantage of recording a number of concerts on a tour is that it allows the band to select the live versions that pleased them the most.

The facts that it’s recorded 30 years after their peak, pulls songs from a number of concerts and the band are missing Jerry Dammers means that the album is penalised on my ratings scale for authenticity.

Even considering those issues, this is strongly recommended for anyone who wants a live album by The Specials or who is interested in the British 2 Tone/ska movement in the late 1970s. It gains on the earlier live albums in terms of the stronger set list and the addition of the brass section.

Don’t just stop at The Specials, The Beat, early Madness, Bad Manners and The Selecter are all worth investigating.