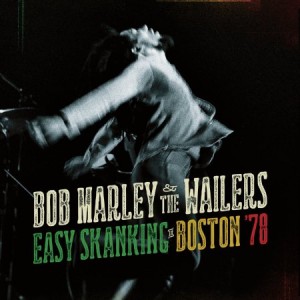 Although the Kaya studio album was released in March 1978, the concert recording only has one song from the album ignoring gems like Is This Love and Satisfy My Soul.

Instead we have four songs from Natty Dread and three each from Exodus and Burnin’.

The two most famous live albums by Bob Marley are Live and Babylon By Bus that were issued during his lifetime.

It repeats six songs from Live (At The Lyceum in London) from 1975 – Burnin’ & Lootin’, Them Belly Full, Lively Up Yourself, No Woman No Cry, I Shot The Sheriff and Get Up Stand Up

It also repeats six songs from Babylon By Bus from 1978 – Exodus, Lively Up Yourself, Rebel Music, War / No More Trouble, The Heathen and Jamming. This means that, if you own both of these albums, there are only two new live songs – Slave Driver and Easy Skanking.

If you already have those two albums, the need to buy the album therefore depends much more on the difference in versions and the overall level of performance plus the appeal of having the concert DVD.

I’m not convinced myself. There was very little crossover between Live and Babylon By Bus which made both essential purchases. However if you are new to live recordings of Bob Marley, then this becomes more appealing than Live.

Is this a great live album? Is it the best live album by Bob Marley & The Wailers?