Ellington At Newport is a famous live album by Duke Ellington and his band. It was recorded at the Newport Jazz Festival on July 7, 1956 and was released later the same year.

In 1999, a CD was released that brought us the complete recordings spread over two CDs together with some bonus songs.

By the 1950s, big bands had gone out of fashion and Duke Ellington no longer had a recording contract. This re-energised his career and is one of the most famous “live” jazz albums.

The most famous part of the album is the 27 bar saxophone solo in Diminuendo and Crescendo in Blue by Paul Gonsales and that was recorded into the wrong microphone, going out to Voice of America listeners but not properly captured on the Columbia recording. It obviously needed to be fixed.

It turns out that the original At Newport album was not as we thought. It’s said that only about 40% of the album came from the live performance with the remainder recreated in the studio to correct playing and recording problems and with crowd noise mixed back in to create the live atmosphere.

Modern recording techniques finally meant that the performance could be recreated from the original tapes of both of the recordings made for Columbia Records and the Voice Of America radio show and that’s what happened in 1999 when the CD emerged. 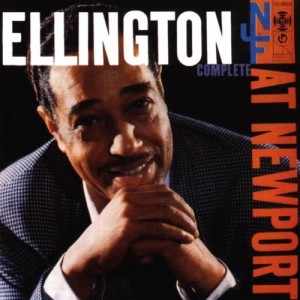 Songs On Ellington At Newport

Songs On Ellington Complete At Newport

Do you agree with popular opinion that this is one of the best live albums by Duke Ellington?