One of the most famous bands that Ellington put together was the Blanton Webster version in the early 1940s. Sadly innovative bassist Jimmy Blanton died in July 1942 but Ben Webster was still with the orchestra when this was recorded.

The album is notable for having the only complete version of the Black, Brown and Beige suite composed by Ellington. Unfortunately it wasn’t well received by the critics who felt that it was too pretentious for a jazz band leader and this response affected Ellington. 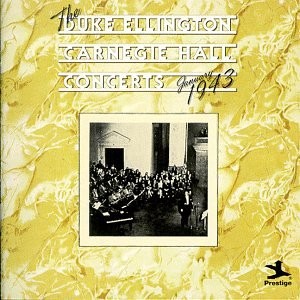 The recording quality has that “sounds old” feeling but I think that, in some ways, it adds to the atmosphere. The instruments can be heard clearly and I don’t have any issues.

This is an historic landmark in jazz with superb musicianship. If you’re a fan of jazz in general and Duke Ellington in particular, this is a must-have for your collection.

Do you think it is one of the best live albums by Duke Ellington and his orchestra?