Live at the Five Spot Vol 1 is a live album by Eric Dolphy and his quintet.

This is the first of three albums from this concert, the others are volume 2 and the Memorial Album after Booker Little died. There is also a Five Spot Complete Version which made the most sense to me. 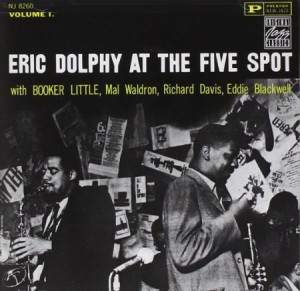 Songs On Eric Dolphy Live at the Five Spot Vol 1

There are only three songs on the original album but since then, an alternative version of Bee Vamp has been added to the CD.

I must admit that I misjudged Eric Dolphy. For some reason, he became associated with Ornette Coleman and free jazz which, so far, I’ve found unpleasant to listen to. I passed on exploring Eric Dolphy until I couldn’t resist taking a step into work with Charles Mingus.

That was a big mistake. Yes Dolphy was an innovative player who experimented with new sounds but much of what I’ve heard is a long way from the ugly squawks of Coleman and Coltrane when he buried the melodies.

Is this one of the best live albums featuring Eric Dolphy?