Waylon Live is a live album by Waylon Jennings And The Waylors.

It was recorded in Texas in September 1974. It was originally released as an 11 track album. A reissue boosted that to 20 songs and most recently 22 more songs have been added. 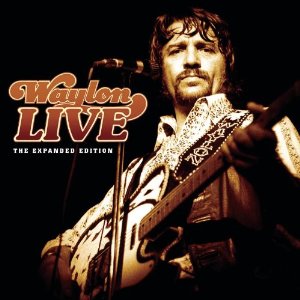 T For Texas
Stop The World And Let Me Off
Lonesome, On’ry And Mean
You Ask Me To
Louisiana Woman
I’m A Ramblin’ Man
Me And Paul
It’s Not Supposed To Be That Way
Slow Rollin’ Low
Rainy Day Woman
Good Hearted Woman
Mental Revenge
Amanda
This Time
Laid Back Country Picker
The Last Letter
Honky Tonk Heroes
Willie The Wandering Gypsy And Me
Donna On My Mind
We Had It All

In the UK we’re not really exposed to much country music and I’ve often been suspicious of delving too deeply into the genre.

This however is excellent and as one of the “outlaw country” albums it provides a nice crossover from more mainstream singer-songwriters.

Do you think that this album is the best live album by Waylon Jennings?

This album is included in the poll to find the best country and country rock live album.