It captures him playing at two concerts in Chicago in 1995:

Luther Allison died on August 12, 1997 just before his 58th birthday. He isn’t one of the better known blues guitarists to the wider world but he’s highly respected by blues specialists. 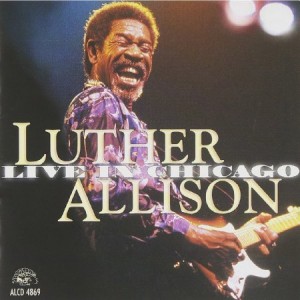 As you can see, his last three studio albums – Soul Fixin’ Man aka Bad Love, Blue Streak and the not yet released Reckless are well represented.

Do yourself a favour and hear these music samples.Unfortunately, the digital album is split into volumes 1 and 2 (each CD) and what looks like an attractive price turns out to be more expensive when you buy the mp3s from Amazon, as I found out.

The Amazon reviewers have got it right. This is a terrific album and it’s refreshing to  see that there’s no duplication of songs between the two concerts.

Great guitar playing, passionate singing and a good performance from the rest of his band.

These links will help you get to the albums quickly and easily but I recommend that you still search for the best deal. Remember the digital version is split into two.