At The Copa is a live album by soul singer Sam Cooke. It was recorded at the Copacabana night club in New York in 1964.

He died on December 11th, 1964 so this is the last live recording we have of Sam Cooke.

This has a very different sound and feel to Live At The Harlem Square Club.

You can’t take the soul out of Sam Cooke but the emphasis here is on singing ballads.

Sam Cooke At The Copa 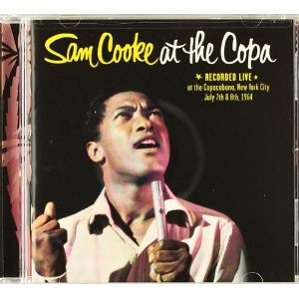 END_OF_DOCUMENT_TOKEN_TO_BE_REPLACED

Sam Cooke’s live recording, Live At The Harlem Square Club 1963 is a classic from the early days of soul. Incredibly it stayed in the vaults for over twenty years before it was first released in 1985.

Originally a gospel star with the Soul Stirrers, Sam Cooke was a pioneer in both soul and cross-over pop at a time when the civil rights movement was growing.

Early versions of this album were called One Night Stand – Live At The Harlem Square Club.

The set list is short but what’s on it is gold. END_OF_DOCUMENT_TOKEN_TO_BE_REPLACED