Gold Dust Live At The Royalty is a live album by Sandy Denny.

It was recorded at the Royalty Theatre, London (now renamed as the Peacock Theatre) on 27 November 1977. She died a few months later on 21 April 1978.It wasn’t released until 1998.

The original recording had problems with the acoustic guitars and backing vocals. These were redone to make the album fit for release by different people than who played at the original concert. 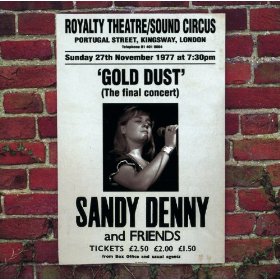 Simon Nicol and Chris Leslie added backing vocals for the CD release even though they did not perform at original concert. Both of these people have been members of Fairport Convention. Jerry Donahue, who redid some of the guitar parts has been a member of Fotheringay and Fairport Convention.

Do you think this album is the best live album by Sandy Denny?

This album is included in the poll to find the best live folk and folk rock albums.