It features three CDs and a DVD.

While the live in the studio recordings often have a little more intensity or intimacy than studio tracks which risk being over-produced, the really interesting things here are the live in concert performances: 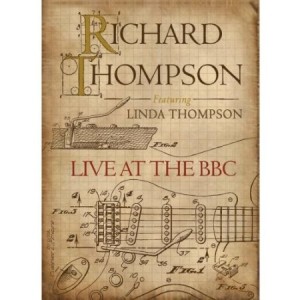 Songs On Richard Thompson Live At The BBC

Disc: 1 All songs feature Richard and Linda Thompson
1. The Little Beggar Girl
2. Dragging The River
3. The Great Valerio
4. The Neasden Hornpipe / The Avebury Particle Accelerator / The Flowing Tide
5. I Want To See The Bright Lights Tonight
6. Hokey Pokey
7. Georgie On A Spree
8. I’ll Regret It All In The Morning
9. A Heart Needs A Home
10. Wishing
11. I’m Turning Off A Memory
12. A Man In Need
13. Withered And Died
14. New Fangled Flogging Reel / Kerry Reel
15. Shoot Out The Lights
16. It’s Just The Motion
17. Back Street Slide
18. Night Comes In
19. Dimming Of The Day
20. Modern Woman

The sources for these videos are:

The BBC is doing at excellent job at producing these comprehensive summaries of the artists and groups that have featured on radio and television in the UK. This is another that is a must have for any dedicated fan of Richard Thompson.

The sound quality on the first few songs from January 1973 is dodgy but it improves quickly. As always where there is an issue with sound, I recommend that you listen to the mp3 samples at Amazon.com or Amazon.co.uk.

The only problem I have with this is that it is HUGE and therefore anyone new to Richard Thompson is probably better off elsewhere. I love live albums so that’s usually my first suggestion and there is a poll below to help you to find the best. However I can only agree that the two most recommended Richard & Linda Thompson albums – I Want To See The Bright Lights Tonight and Shoot Out The Lights – are terrific. (see Amazon.com and Amazon.co.uk)

Is it the best live album by Richard Thompson? Which do you recommend?