More Guitar is a live album by Richard Thompson which was recorded at two concerts in Washington DC in November 1988. His Amnesia studio album was released the previous month.

As the name suggests, the emphasis is on Thompson’s prowess with the electric guitar although I should emphasise that it’s always within the structure of the songs and it doesn’t turn into the excess that you might hear on heavy rock albums. 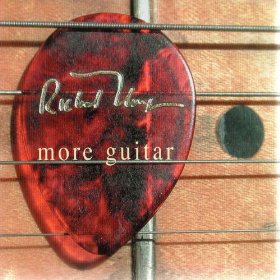 Five tracks from Amnesia make it a good tour summary and there’s a varied selection from his previous albums. Can’t Win is extended by 3 1/2 minutes and Jerusalem On The Jukebox has four minutes added as Thompson cuts loose.

The band on this recording consisted of:

Is This The Best Richard Thompson Live Album?

To help readers to find the best live albums, I ask people to vote in specialist polls.

If you’ve got a comment to make on the poll results, I’d prefer it if you could make it on the Best Richard Thompson Live Album page rather than this one about More Guitars, unless of course you think this album is the best.

You might also be interested in the poll results for the following artists – Bob Dylan, Bruce Springsteen, Eric Clapton, Neil Young,