Live: All The Way From America is a live album by British singer songwriter Joan Armatrading.

Joan Armatrading Live: All The Way From America 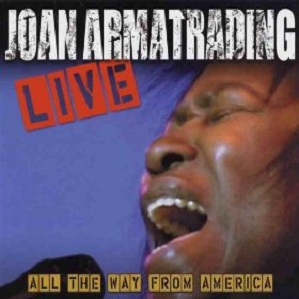 Six songs from the Lovers Speak album Joan Armatrading was promoting and four from her classic album from 1976 called Joan Armatrading and various hits from the late 1970s and early 1980s make this an interesting but not definitive set list.

It’s a lively performance without being definitive.

This is where the album runs into trouble:

I’m a Joan Armatrading fan and it’s nice to listen to this album but it’s more of a souvenir for people who went to any of the gigs on the Lovers Speak tour than a great summary of her contribution to popular music.

However, if you combine it with Steppin’ Out, her 1979 live album or the Steppin’ Out DVD which is longer and includes performances from 1979 and 1980, you have a better summary of her career.

Buying Live: All The Way From America by Joan Armatrading