Solo Acoustic Vol 1 is a live album by Jackson Browne featuring him playing his songs solo with an acoustic guitar and a piano. It was recorded in 2005.

When I was a student in the late 1970s, I used to play his album The Pretender when I was feeling down. It helped a lot to lift my mood.

It was such a success that a few years later, he followed it up with Solo Acoustic Vol 2. 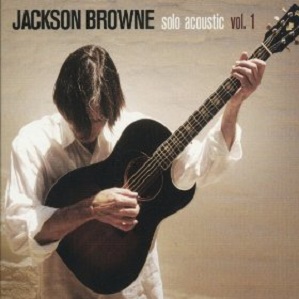 This is a charming performance with Jackson Browne on his own, engaging directly with the audience. To help those people who don’t enjoy the chatter on live albums, the introductions to songs are separated as different tracks.

While volume 2 is available at iTunes, volume 1 isn’t (October 2014) and it’s not available as a digital download at amazon.co.uk either.

Is it the best live album by Jackson Browne?

Please help me to find the best singer songwriter albums